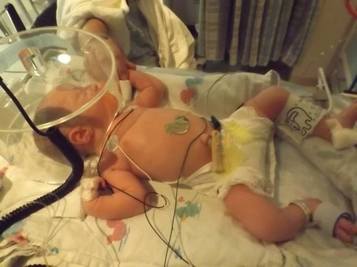 Prenatal-onset
​
Mother's GBS status: Tested positive
Treatment: IV antibiotics during labor and delivery
Gestational Age: 38 weeks, 6days
Age Harmed: At delivery, but believes the infection was prenatal-onset
​
Rosalie was my 3rd child to be born. In both of my prior pregnancies I had tested negative for GBS and my babies were fine. With Rosalie I tested positive for GBS and was told it was no big deal. I would just receive IV antibiotics during labor so I believed my Dr. On Sept 30th I went into labor and in just 3 hours she was born. I barely received 1 bag of penicillin. She was tachycardic all throughout labor and when she was delivered she was blue. She was not breathing, tachycardic. NICU was called in and they resuscitated her for 40 seconds. Once breathing she was in extreme respiratory distress. She was immediately taken to the NICU and put on oxygen, an IV, got antibiotics, had a spinal tap, and could not maintain her blood sugar so put on something for that as well. Her blood cultures and spinal tap never actually grew anything but we were told she was born septic due to the GBS causing an infection while in utero. Might I add my water had never broken and was intact the entire time. My OBGYN ruptured the sac 4 min before delivery. Rosalie spent 8 days in the NICU on medication and today is an otherwise healthy 2.5 year old little girl. She was diagnosed at 15 months with a heart condition called SVT.

I would like to mention that sometime during my 20th week of pregnancy I had a very bad UTI that had me admitted to the hospital for 3 days. I was never informed then if GBS was the cause of that infection.

I am now 13 weeks pregnant and am terrified. At my 6 weeks prenatal appointment they cultured my urine for GBS and found a small trace of it already in my urine but are electing to do nothing about it as it is not current ACOG regulations. I have demanded a consult with a perinatal specialist who I see this week. I am terrified every day that I will lose this baby or repeat the horror of my daughter's story again. I know I have a happy ending and feel for those who suffered much worse fates. GBS is a big deal and the medical profession needs to begin recognizing that.

Kacy shares GBS info with others by giving GBS brochures to obgyns and posting on Facebook, babycenter forums, and support groups.
​To learn more about Perinatal & GBS Misconceptions, click HERE.