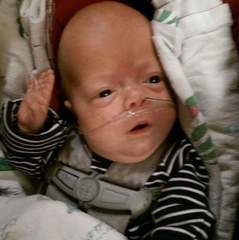 ​I gave birth to him at 25 weeks. He was perfectly fine until he got late-onset GBS. I wasn't far enough along to have ever been tested and I was 19 so I didn't know it even existed. The GBS progressed into meningitis. The hospital we were at made it sound like he would just have learning difficulties. When we were transferred to children's hospital the GBS came back, but they got it under control before it got worse. It was there that i found out that the meningitis had melted 80% of his brain and he would never be able to do anything. He would never walk, talk, sit up, nothing. I was prepared. Then his head started to grow. It was filling up with spinal fluid--a piece of his brain that circulated the fluid was melted. I had to make the decision of giving him endless surgeries for his entire life that could cause infections and pain when he'd never be able to tell me or bring him home and let him experience things before he passed away. I was told he had the piece of his brain that would remember what's happening so I chose to bring him home. He was home for 26 days before he passed. I know I made the right decision, but it still hurts.