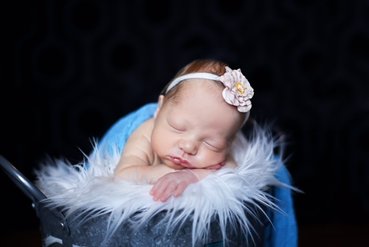 
​On December 19th, 2016 my water broke. I was 25 weeks and 6 days pregnant with twin girls. I went to our local hospital where they tested me for GBS and I tested Negative. Then they flew me to Oklahoma City. Doctors kept me pregnant for 4 weeks. In those 4 weeks every time I had a contraction Kendall's heart beat would drop. Doctors told me it was due to low amniotic fluid in her sac.

Kameron had low fluid in her sac, too, but never had problems with her heartbeat. On January 16th, 2017 at 30 weeks and 6 days, I went into labor and had a c-section. Both girls had very few problems. They were on oxygen, they had jaundice, and had feeding tubes. They also had several rounds of all kinds of antibiotics to cover every kind of infection.

On February 9th 2017, 3 weeks 3 days after they were born, they were released from the hospital. Both were doing great and taking a bottle. On February 21, 2017 Kendall started crying at 5:30 am. She was moaning and pushing like she had gas. I thought she just had a stomach ache. I got her to eat half a bottle. Then she went back to sleep but was moaning. I had to get my 6 year old son up and ready for the school bus to pick him up. I got him off to school. My other two boys had the flu so I had to get them ready to take them to the doctor. My mother-in-law showed up to watch the girls so I could take the boys to the doctor.

Before I left I told her I thought Kendall had a tummy ache so to keep a close eye on her. We left at 8:30 and got home around 11:30. When we got back my mother in-law said she hadn't gotten Kendall to take her bottle so I said to let me try. As soon as I picked her up I could tell she was pale. I tried to feed her, but she wouldn't take the bottle. Then my mother-in-law went home and I noticed that Kendall felt really cold.

I laid her on her changing table and took her temperature. It was 94.5 so i took her blanket and threw it in the dryer to warm it up and then called the hospital. They told me to bring her in. I took the blanket out of the dryer and wrapped her up in it. I called my husband and told him to come home and watch the boys so I could take her to the hospital.

We live 30 miles from the hospital. So it took 15 minutes for him to get home from work and 30 minutes for me to get to the hospital. It was 1:30 when I got there. She didn't look good. She was pale, weak, and cold. The doctor told me she was very sick and I should call a family member to come be with me. i didn't understand. I know she was sick but didn't think she was going to die.

They did a spinal tap on her and it was full of bacteria. The test came back and it was meningitis. They started giving her antibiotics and they called for a medi-flight. Her heart stopped 3 times. On the 3rd time they couldn't get it to come back. She passed away at 6:05 pm.

I didn't wake up that morning thinking my baby girl was going to die today. I think about her everyday. I also think about the "What If's" if I would have gotten her to the hospital sooner, would she have survived? Did she get GBS from me or from someone that didn't wash their hands? I will never know. I miss her so badly. But I was lucky enough to have had twin girls. I still have Kameron. They put her on antibiotics just in case she had GBS too. She is doing really good and is 3 months old now. She is starting to smile a lot. She is loved by so many people.